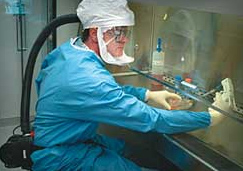 The airborne contaminants in foundries are generally released from the -

Gases are formless fluids, which expand to occupy the space or enclosure in which they are enclosed. At normal temperature and pressure, true gases exist in the form of vapor. Many gases can be stored under pressure in liquid form until they are vaporized for use. These pressurized gases should be controlled in order to make the workplace air free from contamination.

Gaseous contaminants may also arise as a result of a chemical reaction or due to the breakdown of a complex chemical.

Vapors are the gaseous form of substances, which generally exist in the form of liquids or solid state at room temperature and pressure. These vapors are produced as a result of the natural evaporation, heating or spraying of organic solvents that are used as solvents, paints, binders and catalysts in foundry processes.

Vapors found in a foundryGases and vapors are mostly invisible, however, some may have strong and characteristic smell, which may give the hint of their presence in a foundry. Instead, in some cases, the gases may have no such smell and may induce health problems at extremely low concentrations.

Some other gases show their presence through various irritating effects, such as coughing, respiratory irritation, asthma, acidic taste and watering of the eyes.

Dust is particulate matter produced from solids and dispersed into the air due to the movement, loading, cleaning and handling of inorganic materials, such as metal, wood and sand. Fumes are airborne solid particles, which are formed as a result of the condensation of a material from a volatilized solid, generally molten metal in cool air.,br>The different types of dust and fumes that expose workers to various health risks in foundries are -

There are a number of control measures, which can be adopted alone, or in combination with other methods to prevent or minimize the exposure to risk.