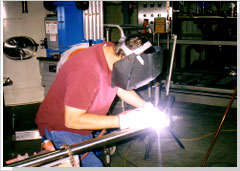 Brazing and soldering are very similar processes of joining metals and other materials by applying heat and a filler metal. On the application of heat, metal flows by capillary action into the gap between the base metals and join them by forming a metallurgical bond between them at the molecular level. The durability of the joint depends on the adhesion at the interface as well as the contact area of the joint. Hence, the surface should be clean and free from oil, rust and other contaminants. 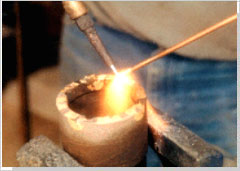 Capillary attraction can be defined as the ability of a liquid to rise into a passage or narrow gap against the force of gravity.

Almost every metal, and some specific combinations of metals, which cannot be successfully fusion-welded together can be brazed. While the silver-based brazing alloys are the most frequently used in brazing, there are also groups of brazing alloys based on aluminum and magnesium, on copper and phosphorus, on copper alone or copper and zinc, on nickel, and even on gold.

In almost all brazing applications, heat is applied directly to the parts to be brazed, not directly to the brazing alloy. The different heat sources that can be used, include - furnaces, flames, radiant (infrared) sources, electricity (through resistance or induction heating), even molten salt baths. Torch brazing is the term referred to the process in which gas flames are used.

Key to successful brazing The key to successful brazing is the design of joint. As the process depends on capillary attraction, the spacing between the parts to be joined should be small and properly controlled. Though it is possible to make a square-butt joint, the two edges should be carefully prepared, and precisely spaced, if the joint is to be successful. Such butt joints are occasionally used, however they are exceptions. Virtually all brazed joints can be classified as lap joints.

In brazing processes, as in braze welding, a flux is needed. The objective of the flux is to remove from the surfaces of the parts any oxides that may remain after proper mechanical cleaning, or which form as the parts are heated to brazing temperature. The fluxes that are used with silver- or copper- based brazing alloys, are based on boric acid and other fluorine or boron compounds. 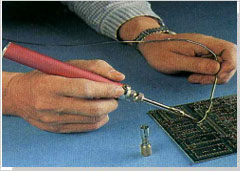 The best joint geometry in soldering is the lap joint due to the larger contact area. Common solders are alloys of aluminum, lead, tin, zinc, silver, and cadmium. The solders are selected on the basis of materials being soldered and the temperature, which the finished workpiece will be exposed to.

Fluxes are usually inorganic or organic acids or organic resins and must be chosen carefully for every application, and should usually be removed by washing after soldering to prevent corrosion. Ultrasonic soldering improves adherence by removing the oxide layer without using flux.

Soldering, while extensive in the electronics industry and in manufacturing containers for liquid- or air-tight joints, is normally not used in the cases where structural strength is essential.