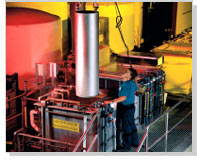 Metal plating is a technique used to favorably change the surface properties of a metal by adding some sort of metal coating to the part. Nowadays, plating has become a general name for surface-covering techniques, wherein a a metal is deposited onto a conductive surface.

Metal plating is essential as a corrosion inhibitor for the manufacturing of mobile phones, computers and electronic devices as well as other uses such as solderability, hardness, wearability, paint adhesion, friction loss, shielding, conductivity, etc. Moreover, it has emerged as a key technology for the design and development of new machines.

Plating is also used for decoration purposes, such as in jewelry to provide a gold or silver exterior. Thin-film deposition techniques have executed plating on scales as small as the width of an atom, so it is suitable to call some plating applications nanotechnology.

There are different processes of metal plating. For example, in one process, a solid surface is covered with a sheet of metal, and then heat and pressure are applied to fuse them together. Some other plating methods include vapor deposition under vacuum, sputter deposition, and methods using gas or vacuum conditions. In recent times, however, only the plating techniques that use liquid tend to be referred as "plating". Metallizing is referred as the technique of coating metal on non-metallic objects. 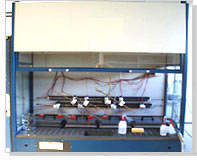 Electroplating is practiced by passing an electric current through a solution containing metal objects and the dissolved metal ions to be plated. The metal object works as the cathode in an electrochemical cell and attracts ions from the solution.

Ferrous and non-ferrous metal objects can be plated with a comprehensive range of metals, including aluminum, cadmium, chromium, brass, bronze, copper, iron, lead, gold, platinum, silver, tin, nickel, and zinc. The method is regulated by controlling several parameters including temperature, voltage and amperage, and purity of bath solutions. Plating baths are mostly aqueous solutions, hence, only those metals, which can be reduced in aqueous solutions of their salts can be electro deposited. The single major exception to this principle is aluminum that can be plated from organic electrolytes.

Plating operations are typically batch operations, wherein metal objects are dipped into a series of baths containing several reagents for attaining the desired surface characteristics. Operators can either carry the workpieces in barrels or on racks.

The sequence of unit operations in an electroplating method is similar in both barrel and rack plating operations. A typical plating sequence involves several stages of cleaning, rinsing, stripping, and plating. 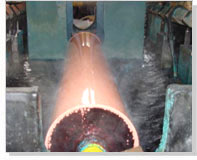 Electroless plating can be defined as the chemical deposition of a metal coating onto an object using chemical reactions instead of electricity. The primary ingredients in an electroless plating solution are a source metal, a reducer, a complexing agent to hold the metal in solution, and different buffers and other chemicals designed to maintain bath stability as well as to increase bath life. Copper and nickel electroless plating generally are used for printed circuit boards.

Immersion plating is a similar technique in that it utilizes a chemical reaction to apply the coating. However, the difference is that the reaction is induced by the metal substrate rather than by mixing two chemicals into the plating bath. This process results in a thin metal deposit through chemical displacement, generally silver or zinc. Immersion plating baths are normally formulations of alkalis, metal salts, and complexing agents. Electroless plating and immersion plating usually create more waste than other plating techniques, however individual facilities vary considerably in efficiency.