Mold filling occupies a significant position in the entire casting process. The two factors, which greatly impact the flow process, are fluidity and turbulence.

Fluidity, a technological feature, reflects the ability of liquid metal to flow continuously even as it solidifies, via a given mold passage, filling it to reproduce the detailed design. It is expressed as solidified length of standard spiral casting. Fluidity is controlled by various factors listed below,

It indicates irregular and fluctuating flow with disturbance caused when inertia forces are higher than the drag forces and when there are obstructions in the path of flow such as change in thickness or a sharp corner. Turbulence can be of two types, namely.

The three types of defects usually encountered during the mold filling process are discussed below,

The process of flow of molten metal during casting is very transient involving major changes in the molten metal before it solidifies. The entire activity is broken in three phases i.e. gating channel filling, melt stream impinging on the mold wall and mold cavity filling.

When the ingates are located at bottom or side of the casting the ingate velocity gradually decreases as the metal rises above the ingate levels. The instantaneous velocity in this case is expressed as,
Vingate = cf v (2 g (hpour + hcope - hi)) Gsprue / Gingate

Thus the filling time for the entire gating system is determined by ascertaining the velocity of molten metal at each stage such as basin, sprue, runners and ingates. It is also assumed that castings fills layer wise and the time Gating parameters for filling analysis to fill a layer is expressed as Gating parameters for filling analysis wherein Ai is the cross-sectional area being filled, ?h is the layer thickness; and Aingate-j and Vingate-j are the cross-sectional area and the instantaneous velocity respectively of ingate j. Further the total time can be calculated by adding the incremental time required for filling all the layers of the mold cavity. However this method does not account for other aspects of mold filling such as splashing, rejoining of streams etc and hence a numerical simulation method is used.

It is based on three equations for mass, momentum and energy balance expressed in differential form called as Navier-Stokes equations. These equations, expressed in a differential form are referred to as Navier-Stokes equations, given below. The first one is for continuity, the next three for momentum along x, y and z directions, respectively, and the last for energy. 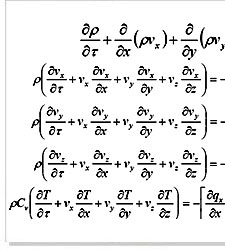 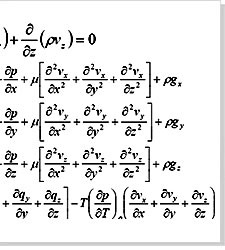 These equations can be solved using different methods like Marker and Cell, Simplified MAC, Solution Algorithm-Volume of Fluid (SOLAVOF). In all such methods the mold is divided into different cells classified as empty, full or surface cells, keeping a track of the location of the free surface.