In the process initially metal in molten stage is fed into the region called cavity. In this region the wall does the job of absorbing the heat present and passes it to inside layers. This passing of heat happens in different ways depending on the type of metal. 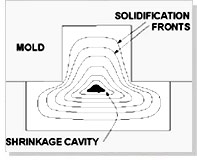 For instance in case of metals which are pure the passing of heat is done one layer after another starting from outer layer and gradually proceeding toward inner layers. The technical term on this aspect called as solidification front refers to the border region during the method from liquid area to solid area. The process of solidification takes place gradually layer-by-layer starting from outside proceeding to inner region.

Fig: Casting solidification in the Mold That is the front region gets solidified first which causes reduction in volume space and there by causes the metal in molten state present in the inner liquid region to get attracted towards the solidified region.

The cavity of shrinkage which is otherwise called as void area gets created when all liquid is used and when the solidification process reaches the most inner area. In order to prevent the above void region getting created feeder is attached.

The feeder, which is designed, gets solidified only after the hot spot. When this is done the cavity of shrinkage gets moved along the direction of feeder. Once the above happens and solidification of solid is over the process is cut off and again recycling is done. Thus solidification phenomenon is a very vital process in any field.

Proper understanding of the phenomenon of solidification helps in reducing various errors that happens during shrinkage and also detect and remove the type of shrinkage defect once it happens.

The formation of the shrinkage cavity, which was described above, depends on various factors. One of the important attributes to name in this direction is the temperature of cavity maintained inside with respect to the surrounding areas. The above factor of temperature cannot be analyzed and calculated in a simple manner. That is even for smaller and simple objects the above attribute of temperature is difficult to calculate because various types of heat modes gets involved during the process.

To name some on this aspects are transfer of heat within the metal in molten stage, amount of heat conducted by material used for molding process, radiation in the boundary between metal and mold and so on. Among this the term interface heat coefficient takes a lead role whose value is directly proportional to the oxidized layer thickness and air gap present in the boundary region.

The above two values namely the oxidized layer thickness and air gap present in the boundary region are variable and not fixed as it gets changed during the process of solidification. The various attributes which affects and impacts the castings solidification process are range of freezing, thermal gradient and rate of cooling.