Types of Blow Molding : The types of blow molding which are three in number are discussed in detail below:

Extrusion Blow Molding : Extrusion Blow Molding is also denoted as EBM in short in which melting of plastic is done and the melted plastic is passed over a tube which is void and which is closed by a mold made of metal kept in low temperature condition. By blowing air over the hollow tube which causes the plastics to get the figure of the void container. After the shaping process is done the plastic is cooled. After sufficient cooling of the plastics is done the frame is unfastened to fetch the product.

There are various products, which get prepared by the process of extrusion blow molding. To name some in this direction are containers that we use in our daily life, shampoo bottles, pipes, and hoses and so on. 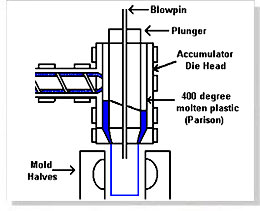 Extrusion Blow Molding has two major types associated in the process of blow molding. They are :

Some of the systems used in the above process to be named are the rotary wheel blow molding systems and shuttle machinery takes its place in continuous extrusion equipment.

Stretch Blow Molding : SBM in short is one in which injection molded process is first used to get the plastic frame as a shape called as preform. The preforms have shapes, which include the top as well as the end part of the container. 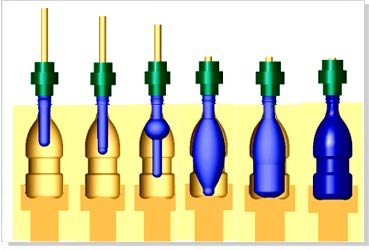