The sand mold is divided into two halves, which has the architecture and functionality as follows. The molding board holds the drag, which is nothing but the bottom, half of the mold. Since the molds are poured with greater force the cores must be of higher strength to handle the same.

The cores gets formed by various ways and one such way is by usage of chemical binding systems which is most popularly used in Canada. After inserting the core the cope, which is otherwise called as the top of the mold, is placed at the top portion. There is a parting line, which separates the two halves of the molding.

Since the attributes of metals keeps changing based on climate, weather and temperature conditions like expansion takes place during cooling its is essential to take proper steps and care to maintain the two halves in molding. One such step in this direction is to use weighting on top half of the mold. 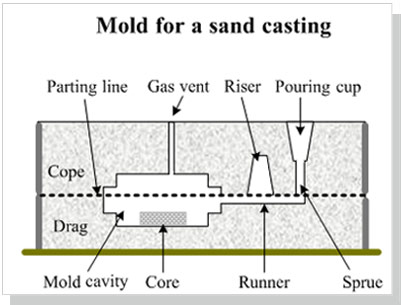 The risers take up several functionality in the process of mold making To name some are releasing gases through vents, helps in process of solidification before casting of cavity by usage of reservoirs, reducing solidification problems by removal of first metal that gets poured into the casting cavity and handling waste cavities which helps in metal getting raised in cavity which further enhances solidification process.