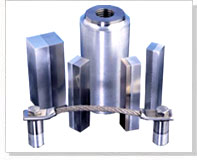 Bonded metals are a type of metals that are formed using metal bonding to bond two metals together. The technique can be used to bond dissimilar metals, however it can also be harnessed to bond powders of metals and ceramics.

In bonded metals the bond is usually harder than the host materials themselves, as limit failure takes place in the weaker of two metals and not at the interface of bond. In addition, the bond is formed over the complete surface area of contact and not just on the edges. Some of the metal bonding techniques also facilitate the bonding of metals with widely varying melting temperatures, such as aluminum and steel.

Metal Bonding Metal bonding is a technique in which structural adhesives are mainly used to bond thin material lap joints, replacing rivets or spot welds that are generally used in these applications. Metal bonding can be done either by explosion bonding or through the use of adhesives that eliminate the need for drilling holes.

Metal Bonding Through Adhesives Use of adhesives for metal bonding has found to be suitable for bonding of thin metal sheets to honeycomb core material. Metal bonding adhesives result in joints with high strength and rigidity and provide the use of thinner gauze materials. Metal bonding adhesives also eliminate bulges, gaps, and protruding fasteners on aircraft exterior surfaces, which help in reducing drag forces on the aircraft. As an aircraft design consideration, metal bonding via adhesives is a crucial factor in facilitating sonic dampening and extending the fatigue life of components of aircraft.

Explosion Bonding Explosion bonding technology harnesses the energy found in explosives to bond metals permanently. In this process, a high-pressure collision is created (under very precisely controlled conditions), between the surfaces of two metals to be bonded. The atoms of the two adjacent metals are propelled together with such force, which they really overcome with their natural repulsive forces, resulting in a stable equilibrium as they share electrons. The method uses pressure, not heat, and thereby avoids all the conventional heat-induced problems that are found in welding, such as recrystallized grains, phase changes, the formation of inter metallics, etc.

The advantages of technology are most evident in its ability to bond dissimilar metals, however it can also be harnessed to bond powders of ceramics and metal. The bond is usually firmer than the host materials themselves, as limit failure takes place in the weaker of the two metals and not at the interface of bond. The absence of heat in this method makes it possible to bond metals with highly varying melting temperatures, such as steel and aluminum. The bond can be applied in most cylindrical or flat morphologies, however, intricate geometries would present difficulties.

Bond vs Weld In the context of metal bonding, the term bond refers to a true atomic bond, and not to another typical use of the term that might suggest that there is a glue or agent involved in promoting the bonding. The term bond in the context of metal bonding therefore does not imply the use of any bonding agents. Sometimes the metals are broadly referred to as being welded, while the term weld implies that heat is used to join the metals.

Advantages Many times engineers and technicians are faced with the dilemma of material selection. It is common to find that a metal, which will work best for a particular element of the design is deficient in properties required for other design elements. It is also possible for a material to display superior corrosion resistance, electrical or thermal conductivity, however be lacking in the hardness, strength, weldability or wear properties that will be necessitated by the final design.

Bonded metals enable design engineers to specifically place particular materials exactly where they require to be, without compromising other crucial design elements. Design engineers who implement the principles of metal bonding applications hold a discrete advantage over their competitors.