A high pressure propane burner assembly consists of a burner head, which uses venturi type mixing instead of forced air. The assembly does not require any pilot light or electricity, as it is designed to be It needs no Pilot light, or electricity, as it is meant to be functioned manually with the use of propane tank valve. The burner runs from 1/2 lb up to 45 lbs of Pressure(psi).

Some of the important uses of a propane burner assembly are - 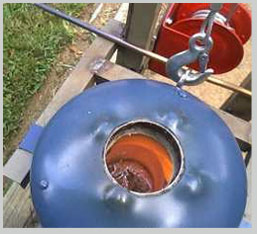 propane burnerThe procedure of designing propane burner assemblies for uses in home foundries is not very scientific and basically depends on the work previously done by others. The burners that hobby metal professionals design are venturi style, or naturally aspirated, burner. The furnaces for propane burners are comparatively small and do not need huge amount of heat to impart the aluminum charge to melting temperature.

The burner is designed using off-the-shelf components and parts, which can be found at local hardware stores.

The burner thus designed has proved to be ideal for the furnace. The burner will burn without any problem inside the furnace. When removed from the tuyere, a barrel flare extension is needed to keep down the velocity of the gas so as to let the burner stay lit. When the regulator is set at 2.5 psi, a complete crucible of aluminum will melt in less than 15 minutes.

Working with a hobby propane burner assembly is similar to a big container of potentially explosive high pressure gas, and lots of potentially leaky joints. In the case you don't have proper knowledge we recommend you to design a charcoal-burning furnace. Although propane is a very hot, clean, and fast gas; it has a vast potential for being dangerous. Do not work with things, which can harm you unless you know what you are doing.