Foundry sand is used for making castings, and is primarily generated by the automotive industry and its part suppliers (these deliver approximately 95 of foundry sand). It consists of clean silica sand which is of high quality or lake sand which are bonded to make molds for ferrous (iron and steel) and non-ferrous (copper, aluminum, brass) metal castings. The following types of sands are used for making molds in the foundry industry: Green Sand, Resin Coated Sand, Molasses, Cold Box Sand, Hot Box Sand, and CO2 Sand.

These types of sand can be obtained directly from the foundries located in the midwestern states of USA such as Illinois, Wisconsin, Michigan, Ohio, and Pennsylvania.

Sand Casting Processes in the Foundry

The two commonly used casting processes in the foundry system are as follows:

While before being used, foundry sand is uniformly graded, the spent sand often contains 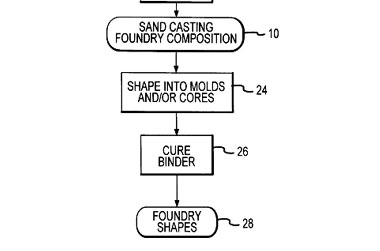 The following processes are at work in a sand casting foundry:


Recycling of Sand in the Foundry

It is possible to reuse the sand which is obtained in foundry processes from collapsed molds, as shown in the following figure, which depicts the flow of sand in a green sand molding system. To compensate for the lost sand, some amount of new sand and binder are usually added to sustain the quality of the casting.