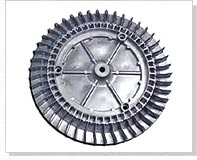 Wrought aluminum is obtained after the metal is subjected to mechanical working by processes including rolling, extrusion and forging.

Wrought aluminum can be identified with a four digit number, where the first digit is the indicator of the alloying elements, followed by a dash, and then a letter identifying the type of heat treatment and a 1 to 4 digit number for identifying the specific temper. e.g. 6061-T6.

Different suffixes have the following meaning: Series of Wrought Aluminum