A well-designed gating system is a perquisite for achieving perfect casting. The key objective of a gating system is to ensure smooth and complete flow of molten metal from ladle to the casting cavity. 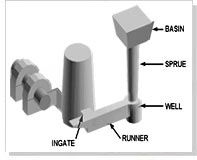 Elements of gating systemThe main components include pouring basin, sprue, well, runner and ingate. Gating systems can be classified based on the position of the parting plane and also on the basis of ingate position as follows,

The number and position of ingate(s) is very important in designing the gating systems. The diagram given below describes the different considerations in the channel layout in horizontal gating system with side ingates.

It is also essential to use adequate number of ingates ensuring that the distance of flow between the ingate and any point filled by that ingate is always less than the fluidity distance. Usually the sprue directs the flow of metal from the basin to the runners and the ingates. The location of sprues depends on the following factors,

Filling time is very crucial in casting as it decides the final quality of product. A slow fill gives cold shuts and misruns while a fast fill can lead to solid and gaseous inclusions. The ideal filling time is a function of cast metal, weight, minimum section thickness and pouring temperature and can be expressed as, tf = K0 (Kf Lf / 1000) ( Ks + Kt t / 20 ) ( Kw W )P

Where tf is the casting time, W is the weight in kg, t is the section thickness in mm and Lf is the fluidity length in mm, whereas K0, Kf , Ks , Kt , Kw are all coefficients. The value of these coefficients can be set to achieve a perfect metal-process combination in specific castings.

The velocity of molten metal also crucial role in deciding the optimal filling time. The velocity usually varies within the gating channels and the mold cavity. It depends majorly on two factors,

A gating system is designed to fill the casting in prescribed time keeping a constant level of liquid metal in the basin to achieve a controlled flow rate via the choke, a small cross section in system that regulates the flow rate.

The dimensions and shape of different elements in the gating systems is determined as follows, 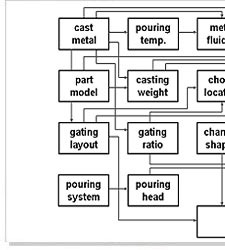 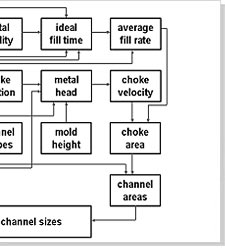 Different combinations of gating system designs and mold filling are carried out to completely eliminate filling defects. A gating system can be assessed using the following criteria,

The gating design can be validated using the following techniques,