In this process the metal is mechanically worked by giving hammer blows or by blasting with shot called shot peening. Peening is primarily a cold work process. It has a tendency for expanding the surface of the cold metal which helps in removing the tensile stresses and exciting compressive stresses. It also encourages the strain hardening of the surface material.

The process starts with bombarding the surface of a part by a small spherical media called shot. Each piece of shot is like tiny peening hammer. This produces a small indention or dimple in the surface. This causes the atoms on the surface of the metal to be crowded and pushes outward to comeback to its original shape. This in turn pulls the atoms of deeper layers towards the surface which resists the outward pull.

An internal tensile stress takes place that tries to keep parity between the part and the compressive stress on the surface.

All most all fatigue and stress corrosion failures starts at the surface of a part, but cracks will not move to a compressively stressed zone. A uniform layer of compressive stress at metal surfaces is created by the over lapping dimples from Shot Peening. This considerably increases the part life. 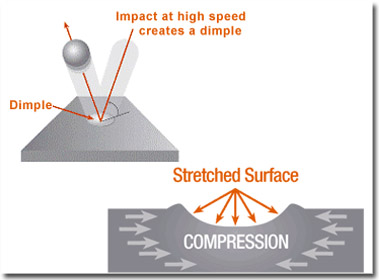 Advantages of Peening Process Resistance to: