The second most abundant metallic element in the Earth's crust after silicon, aluminum is a comparatively new industrial metal, which has been produced for commercial uses for just over 100 years. The metal weighs about 1/3rd as much as copper or steel, is malleable, ductile, has excellent corrosion resistance and durability and can be easily machined and cast. Measured either in value or quantity, the use of aluminum exceeds that of any other metal except iron, and it has proved to be important in virtually all the segments of the global economy. Some of the important uses of aluminum metal include transportation (airplanes, trucks, rail cars, marine vessels, etc.), packaging (cans, foil, etc.), consumer durables (appliances, cooking utensils, etc.), construction (windows, doors, siding, etc), electrical transmission lines, machinery, and several other applications.

Types / Grades of Aluminum Scrap Different grades and varieties of aluminum scrap is used for recycling purposes and to recover pure aluminum from the scrap. Given in the table below are some of the important grades / types of aluminum used in recycling

Aluminum Scrap Recycling Processes Aluminum scrap recycling industry is characterized by companies, which fit into one of the following profiles - -

Recycling of aluminum scrap can be done in different ways or processes that depends on the input material, facilities available and the output desired. An aluminum recycle may involve at least one of the following ... 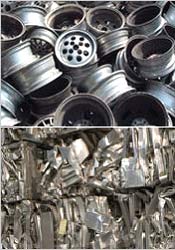 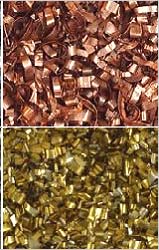 Aluminum Recycling - Some Facts & Figures Some aluminum products are easy to recycle, while other are not. For example, the aluminum foil used in food industry to package prepared frozen meals is not readily recycled. In contrast, aluminum beverage cans are the easiest to recycle. In 1998, around 64 billion of the 102 billion aluminum cans used were recycled. However, this recycling rate of 63 % is low when compared with some other countries. Japan is in the leading position with 79 % of used aluminum beverage cans recycled. Brazil is second in the list with 77 %. In Japan, the key driver for the recycling is the scarcity of sites for garbage, whereas in several developing countries it is being driven by the widespread unemployment.

In Brazil, where the rate of unemployment is high, the recycling of aluminum beverage cans has become a prime source of employment. According to an estimate, around 150,000 Brazilians make a living by collecting and taking the beverage cans to the recycling centers, thereby earning $200 a month, compared with the minimum wage of $81 a month. The system, which has evolved in Brazil for recycling of aluminum cans now provide employment to more people than the automotive industry.

In spite of the high recycling rate for cans, the overall aluminum recycling rate across the world is not high. In the US, the scrap share of aluminum production in 1998 was 33 %. Around half of this was from scrap, which is generated at plants where several aluminum products are manufactured. This means that the amount of aluminum recovered from consumer products was quite small. A major reason for this is is that investing aluminum in cars and airplanes is comparatively recent, thus restricting the amount presently available for recycling.