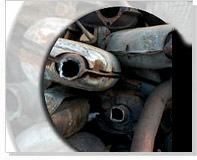 Scrap catalytic converters contain some of the most expensive metals on the planet - metals that never wear out, even if the converter stops functioning and must be junked. Since 1975, every vehicle sold in the US and Canada is literally a "platinum mine" on wheels that can eventually be replaced. Thousands of converters are substituted daily (Once Ford announced the recall of 680,000 converters - all of which became available as scrap) and tens of thousands of cars are going to junk yards with their treasured, platinum-loaded converters intact. The profit potential in this industry is huge with EPA prohibiting the resale of these catalytic converters.

The catalytic converters designed in vehicles function as a primary mode for reducing the emissions of air pollutants. These converters contain Platinum Group Metals, just like the ceramic ones and the recycling companies specialize in recovering these values and paying cash for the automobile catalytic converters.

Some of the important types of catalytic converters include -


Why Recycle the Scrap Catalytic Converters?

By recycling the scrap catalytic converters, we are doing our part to save the planet. These converters use a variety of precious metals, including - platinum, palladium and rhodium a substantial portion of which are mined in areas with a lack of environmental protection legislation, causing substantial negative environmental effects.

Call the recycling company. Pick-up and transportation is generally arranged by them. They even supply packaging materials, if required.

Once the converters reach the processing facility, they are immediately counted and graded. Based on the existing market prices for platinum, palladium and rhodium, a purchase offer is offered.