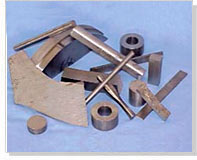 Today, there is a global trade in the buying and selling of high temperature scrap alloys that involve several companies across the globe. According to forecasts, the volume for both buyers and sellers will continue to increase in the future.

Different grades and varieties of tungsten scrap are used for recycling purposes and to recover pure tungsten from the scrap. Given in the table below are some of the important grades / types of tungsten used in recycling-

The recycling of tungsten scrap is by no means a modern technique. On the contrary, it has been established for several decades. Even before anyone thought about the recycling of paper, glass, and aluminum - as is common today in most of the industrialized nations - a considerable quantity of tungsten was reclaimed from various types of scrap. This is due to the fact that, most of the tungsten ores contain less than 1 wt% WO3 and very rarely high concentrations.

A variety of tungsten recycling methods are available, which can be broadly categorized into four types -

In hydro metallurgical recycling, chemical methods are used to recover tungsten from scrap. The recovered tungsten is used as a substitute for tungsten ore concentrates at conversion plants. This processing method, results in tungsten materials, which were indistinguishable from those developed from ore concentrates.

Melting metallurgy is a tungsten recycling method, wherein scrap is used as a source of tungsten in the production of alloys, such as stellites, steels, super alloys; cast or menstruum tungsten carbide; or ferro tungsten or tungsten melting base.

In this method of recycling, the scrap is disaggregated into a powder by chemical and / or physical means without changing its actual composition.

In semi-direct recycling, one component of the scrap is dissolved chemically that allows the scrap to be broken down by physical methods.