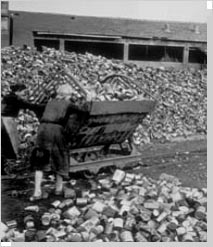 As tin has been one of the higher valued base metals and as the infrastructure to reclaim tin has been well-developed for many years, the metal has significant recycling rates, though lower than some other metals. The metal is a relatively scarce element with an average abundance in the Earth's crust of about 2 parts per million (ppm) compared with 63 ppm for copper, 94 ppm for zinc, and 12 ppm for lead. The metal is produced from hard rock deposits and placer deposits derived from the lodes.

Most lode tin deposits occur as greisen, replacement, skarn, or vein-type deposits related with granitic rocks or their extrusive equivalents where tin has been concentrated by magmatic differentiation techniques. Placer deposits of various types have been derived from lode tin deposits by weathering and erosion. As cassiterite is heavy and chemically resistant, it is concentrated by weathering in place that removes lighter minerals, or by erosional processes on a slope or in streams. 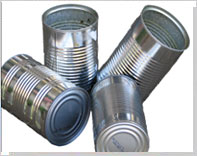 Sources of Magnesium Scrap The price of tin is the most important reason, which influences its recycling rate. In recent decades, tin usually has been the highest priced base metal. Though almost 20 years have passed since tin reached its historical peak price of more than $8 per pound, its recent pricing still offers an adequate incentive to recycle.

The important uses of tin include cans and containers, electrical equipment, construction, transportation, and other. These tin usage patterns are similar to most parts of the world.

Old scrap consists of tin-containing products, such as tin cans and electronic equipment, which have been discarded after use. Old scrap is sometimes also referred as "post consumer scrap."

New scrap is tin waste, which is generated during the production processes and, for the most part, remains the property of the manufacturers and is is continually being recirculated. Home scrap is new scrap, which is immediately redirected back into the production process without leaving the plant. Sometimes new scrap is collected and later sold to scrap dealers who again sell it to similar manufacturers. An example of new tin scrap would be the side trimmings built on a coil of tinplate in a steel mill to satisfy a customer's width specification.

Due to the relatively high value of tin compared with other base metals, such as copper, lead, zinc, etc.; tin recycling industries have become more efficient in recapturing discarded tin products. Also due to its value, the metal has been the target of smuggling attacks in areas, which range from tin smelter sites in developing countries to scrap yard sites in the developed countries.

Tin is normally considered as a nontoxic material and hence its environmental considerations are not major factors in recycling. 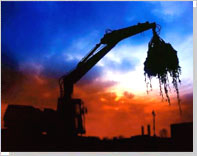 Detinning facilities are important to the tin scrap industry because no other major metal industry has numerous large-scale plants designed for the removal of metal plating. Detinning works are performed on new tinplate scrap from tin mills and can manufacturing plants and from old scrap in the form of used tin cans.

The metal recycling industry, as a whole, has been undergoing significant consolidation during the past 3 decades. Before consolidation, the industry was characterized by numerous small, family-run firms, many of which dated back to the 19th century. Generally, the firms operated only locally or perhaps regionally. However, from 1970 onward, the industry has been characterized by fewer, large size units, which serve national or international markets.

The Steel Recycling Institute (SRI), which is funded by the major steel producers of United States, has encouraged the recycling of used tin cans for more than a decade. These used tin cans have become a crucial raw material for the US steel industry during the past 2 decades. The increased recycling is essential to tin recovery as most of the steel cans are made from tinplate.

Typically, the tin alloys, such as brass and bronze, jeweler's metal, or babbitt, contain from 2-11 % of tin as a minor component of the alloy. The prime exception is solder. Solders for plumbing and construction-related applications have conventionally been 50 % tin-50 % lead, and those for electronics have usually been 70 % tin-30 % lead. The bulk of the secondary tin industry processes several forms of tin alloy (brass, bronze, solder, etc.); the recovered tin is recycled within its own product-line industries and, hence, is used again in alloys.

The scrap materials of all tin alloys are collected via long-established commercial routes and transported back to the original alloy producers. Usually, these alloy producers then use a mix of primary tin along with the primary elements of the other components of the alloy and combine them in a batch heating technique with the collected scrap materials to manufacture new units of the same alloys. Thus, the secondary tin industry is integral to the process of successive regeneration with old and new scrap alloys being mixed with some primary material added for each new production of alloys.

For most of this century, detinning has been the only method in the secondary tin industry through which tin alone, not in alloys, has reached the industry. Accordingly, detinning of tinplate is one of the most important sources of tin scrap in many countries. Tinplate scrap suitable for detinning is collected at different stages - off-specification tinplate generated in the tin mills at steel plants, reject tinplate and tin cans generated at can making plants, reject cans at can-filling operations, and old scrap tin cans accumulated by municipalities via curbside collection programs.

Conventionally, tin scrap is not used to make tinplate due to purity requirements. The tin coating thickness on steel in modern tinplates is on average, about, one-half to one-third of what it was in the early 1960's. Presently, the nominal tin coating thickness on each side of tinplate is only 0.000381 mm. Hence, the economics of detinning is not nearly as profitable as it once was. However, for maximum steel cleanliness, some steel manufacturers prefer to pay more to have tinplate scrap detinned before using it, the presence of tin on the surface of scrap steel often is believed to be a major detriment to good quality steel.

Different grades and varieties of tin scrap scrap is used for recycling purposes and to recover pure tin from the scrap. Given in the table below are some of the important grades / types of tin used in recycling.

The stable consumption pattern of tin and the comparatively high prices of tin compared with other base metals indicates that plentiful amounts of tin will be available for recycling in coming years. In addition, the expected technological advances will tend to encourage more recycling of tin in the next few decades. Except for dissipative uses, tin scrap for recycling will continue to stem from all the consumption sectors. The prices of tin will probably remain as the most important influence on further recycling rates.

Trends toward consolidation in the recycling industry are anticipated to continue, at least in the coming future. The resulting bigger enterprises presumably will be able to attract easy funds for modernization of equipment and technological improvement, which often result in lower unit processing costs. Hence, consolidation trends augur well for increased tin recycling. The recycling of tin raises the sustainability of production of tin by reducing the need for primary production, thus saving energy and extending the longevity of natural resources.