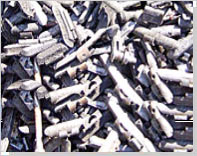 Lead is a highly corrosion resistant, dense, ductile, and malleable blue-grey metal, which has been used for at least 5000 years. In some countries, however, environmental or health consequences have eliminated or reduced its use in cable sheating, petrol additives. Solder, shot, and pigments.

Lead has the highest rate of recycling of all the metals. Due to its corrosion resistance, lead scrap is available for recycling, decades or even centuries after it is manufactured. New environmental regulations in several countries has greatly reduced the dissipative uses for lead, including paint, pigments, leaded gasoline, stabilizers, solder, and ammunition.

Currently, just about half of the total world lead production of 4.7 million tons comes from the recycling of lead scrap. In recent years, the amount of recycled lead has been increasing and this rate of lead production is expected to increase in the future. 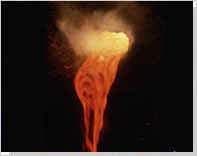 In Europe and most of the rest world, scrap lead acid batteries represent only around half of the lead scrap input to recycling plants. Scrap lead sheet and pipe, cable covering and miscellaneous metal scrap items represent a significantly higher percentage of input scrap to recyclers in these countries than those in the US. With increasing number of vehicles, the percentage of scrap represented by lead acid batteries is expected to increase.

The battery recycling processes have changed dramatically over the past ten to twenty years. The changes have stem from environmental regulations, technological changes, changes in battery distribution and sales techniques, changes in lead-smelting technology, and changes in the lead alloys used in batteries.

In the 1970s, most of the battery breakers used saws for decasing. In this technique, the top is severed, the acid is drained, and the plates are dumped from the case. The lead posts are recovered from the tops by crushing and separation. This technique is still used by many lead smelters the world across.

For many years blast furnaces were the major furnace for lead recycling. This furnace is used to recycle slag, dross, and residues from other processes. Blast furnace requires metallurgical coke, produce large volumes of gas, which must be filtered, needs a special charge, require afterburners to burn carbon monoxide contained in off-gases, and produce slag and matte, which, in some cases, may be regarded as hazardous materials. Blast furnaces produce a bullion, which is high in antimony; this bullion can be promptly refined into lead-antimony alloys.

In most of the world other than the U.S., rotary furnaces have replaced the blast furnaces as the primary smelting vessels for recycling of lead scrap. Rotary furnaces are highly versatile and can accept almost any type of lead-bearing feed material, including battery scrap, dross, dust, scrap lead, and sludge. A rotary furnace can use any carbon source, like coal, coke, or ebonite as reducing agent, and they can use various types of fuels, such as oil, coal, or gas. Rotary furnaces are batch furnaces, and hence can be operated in stages to produce low-impurity bullion for refining to pure lead, or they can entirely reduce the charge to recover all metal values for production of lead-antimony alloys. Rotary furnaces typically use Na2CO3 and iron as fluxes that produce a fluid, low-melting slag.

Small amounts of lead are recycled using lead sweat furnaces. Some major materials that are recycled in sweat furnaces are lead-coaled power and communications cable, lead sheet and pipe, and other products, which contain lead as a coating or as part of a complex part. The process is executed at relatively lower temperatures and produces both metal for refining and dross; the dross is recycled to smelters.

Primary-lead companies usually produce the 99.99 % Pb grade, on the other hand, the recyclers produce the 99.97 % Pb grade. A significant difference in the lead grades is that recyclers usually do not remove the bismuth and silver in their refining process. Recycled lead typically contains adequate bismuth to preclude reaching 99.99 % purity.

The restriction of elements, which increase gas generation in lead acid batteries is more important than the restriction of bismuth and silver in lead specifications. Elements that promote the production of gas and the decomposition of electrolyte are specified at very low levels irrespective of the overall purity of the lead. The specification of pure lead for battery oxide restricts arsenic, antimony, nickel, and tellurium to low levels, whereas non gassing impurities, which include bismuth, silver, and copper are permitted at higher levels. In the highly restrictive specifications, all the gas-producing impurities are limited to a content of 1 ppm or less.

Different grades and varieties of lead scrap are used for recycling purposes and to recover pure lead from the scrap. Given in the table below are some of the important grades / types of lead used in recycling-

The share of recycled lead is expected to rise in the foreseeable future. Firstly, for environmental issues, governments in an increasing number of countries will require that a higher proportion of spent, scrap batteries are recycled, rather than usually being dumped. This enforced recycling will increasingly displace the market-based, economic incentives, which presently underpin the collection of scrap and recycling chain. Secondly, as the importance of battery sector and dissipative uses of lead will decline, and hence the volume of lead, which can be efficiently and economically recycled will increase.

Lead recycling technology has evolved relatively slowly in recent years, however the pace of development and innovation can be expected to accelerate in the future. Technical advancements have favored the emergence of larger integrated plants that are better equipped and combine a number of production stages from automated battery breaking through to refining. These large-scale operations are expected to proliferate further. Similarly, the more widespread recovery of by-products from the processing of battery scrap will continue to be emphasized for both environmental as well as commercial reasons, and new markets for new forms of by-product will be developed.

The wider application of hydro metallurgical processes (involves lead recovery from battery paste by acid leaching and electro-winning) in the secondary sector is expected, and this will further boost the interest in this approach in the primary lead industry. Different variants of the technology have been evolved and it is already in limited commercial use in the US and Europe. Though hydro metallurgy provides the promise of improved lead recovery, and virtual elimination of sulfurous gas emissions, overall energy requirement will be somewhat higher than those of pyro-metallurgical processes.

The lead industry, and especially the lead recycling industry, must adapt to increasingly stringent environmental regulations. Lead acid batteries, an important raw material of recyclers, have been declared a hazardous waste. As batteries are the major source of lead, they make the largest source of lead contamination in landfills and incinerators.